Note: I’m basing all of this on the anime adaptations of Tokyo Ghoul, not the manga.

Haise Sasaki is going to face a difficult decision very soon: whether to continue with his current life as CCG inspector Haise Sasaki, or return to his old life as Ken Kaneki the ghoul. The two lives are clearly incompatible: Kaneki lived as a ghoul and was friends with many other ghouls, while Sasaki works for the agency that hunts ghouls. He’s been able to live a new life as Sasaki because his old memories were lost for some unknown reason and Sasaki has consciously fought against them whenever vestiges of Kaneki’s personality arose, but that won’t be the case forever. Between accepting that Kaneki is a part of him, reuniting with Hinami, and the Clowns’ machinations, Kaneki’s memories won’t stay buried forever. When they inevitably do resurface, Sasaki will be forced to decide whether to abandon the past or return to it.

The decision seems simple on the surface; Sasaki’s life, while not easy, is much happier than Kaneki’s. Kaneki’s life after becoming a half-ghoul was one of constant pain, struggle, and loss. He was tortured, regularly forced to fight for his life, and always facing new enemies who wanted a piece of him. Kaneki made a lot of mistakes, especially in √A, and eventually lost his home at Anteiku and his only remaining friend from his life as a human. In the end, with all his rage and bitterness stripped away, Kaneki chose to walk straight into a crowd of CCG investigators, including Kisho Arima, an act that might as well be suicide. How he survived and ended up as Sasaki has yet to be revealed, but the point still stands that his life as Kaneki was a hard one. 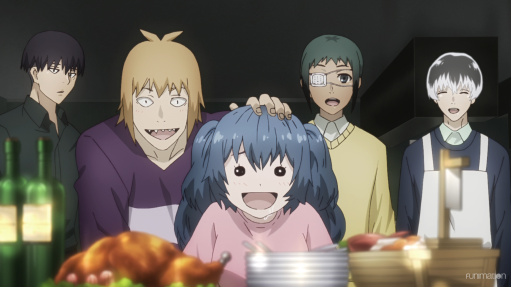 Even though Sasaki often faces life-or-death situations and gets injured in the course of his duties as a CCG inspector, he’s obviously happy with his life. He’s able to do good by taking down ghouls who kill people, like those of Aogiri, and the Quinx squad has become a kind of family for him. They’re an odd and highly dysfunctional family, but a family none the less. Even Arima has become a kind of surrogate father to Sasaki. Sasaki’s life isn’t perfect by any means, but it’s still a happy life. Choosing to return to his old life would mean abandoning this makeshift family; after all, they’re all CCG investigators. This should make his inevitable decision an easy one, but Tokyo Ghoul is never that black and white.

The fact is, Kaneki’s life wasn’t all misery. He had a home and a family with the other ghouls at Anteiku, even if he started to drift away from them to protect them during √A. Anteiku may be gone, but Toka, Nishiki, and the other survivors have made a new home at re. Even Tsukiyama, who wasn’t completely a friend or an enemy to Kaneki, is suffering in his absence. Rejecting the pain and suffering in Kaneki’s past would also be rejecting the friends he made and the people he cared about. And then there’s the matter of Hinami.

As a ghoul and a member of Aogiri, Hinami only remains alive in the CCG’s custody as long as they think she’s useful. If that changes, she’ll inevitably be executed. Right now, her existence is a constant reminder to Sasaki that Kaneki had people he cared about as well, and that those people are still waiting for him. Much as he tries to deny it, Sasaki still feels the remnants of Kaneki’s emotions around her. When the CCG decides to execute her, Sasaki will have to decide whether to save her and return to living as a ghoul, or let her die and live as a human in the CCG.

As for which one he should choose, there’s no easy answer. Either decision would require abandoning something important to him. Kaneki is a part of Sasaki, much as he tries to deny it. Tokyo Ghoul doesn’t have any easy decisions or clear-cut answers. There’s no guarantee that the path he chooses is going to be the right one, and even if it is that doesn’t mean there won’t be consequences. Whatever ends up happening, Sasaki won’t have an easy choice, but it’s a choice he’s going to have to make, and make soon.