Warning: Spoilers for Fate/Extra: Last Encore up to episode 9.

The world of Fate/Extra: Last Encore is unique in the Fate multiverse. Part of that is due to the science fiction elements of the Moon Cell compared to the typical urban fantasy setting from other versions, but there’s more to it than that. Other entries in the franchise always present themselves as the story of the Holy Grail War. You know from the start that this is the central story that encompasses all everyone involved in some way. Extra, on the other hand, comes off as only a story of the Grail War, and not even the main one. Rather than starting at the beginning, Extra starts at the beginning of the end. The resulting world we see can only be described as a dream.

We’re presented with a load of familiar characters from both the original game, and the franchise as a whole; Shinji Matou, Rin Tohsaka, and Rani VIII, as well as many others, all make appearances. In spite of this familiarity, they’re all slightly off from what we’ve come to expect. Shinji initially seems like the slimy bastard we’ve come to know and hate, but that perception doesn’t last. By the time he dies, we’ve learned that his goal was only to create a pseudo-paradise for those Masters who have given up like he did; he’s no longer the person who would stab a friend in the back to save his own skin. On the same note, Rin comes off as far more playful and enigmatic than the more serious Tohsaka from Stay Night. It’s only later that we learn the reason for these sudden changes: Last Encore is set 1000 years after the initial setup. Everyone has already gone through their own stories, had their own growth, and ultimately reached their own endings. As Hakuno wanders through the world seeing familiar faces in unfamiliar roles, we share in the off-putting mix of the familiar and the strange that he experiences. Hakuno’s world is one where everything is both familiar and not, where the past and the present are all mixed up. At the conclusion of Alice’s arc, we’re shown that the brief interludes of Hakuno playing with Alice are only flashbacks to how things once were, flashbacks that ended up tangled with the story we’re seeing. Alice is already lost, and her past is nothing but a dream.

Hakuno’s entire journey through SE.RA.PH has a dreamlike quality. He’s not sure why he continues to ascend or what he’s looking for, but he wants to continue none the less. He continuously encounters people whose stories have already concluded. Dan Blackmore has already been beaten by Hakuno Kishinami, Alice has already befriended Hakuno Kishinami and lost herself afterwards; the Hakuno we know is only passing through the echoes of their stories. Rather than having a story of his own, Hakuno is only intruding on other stories that are ready to end. 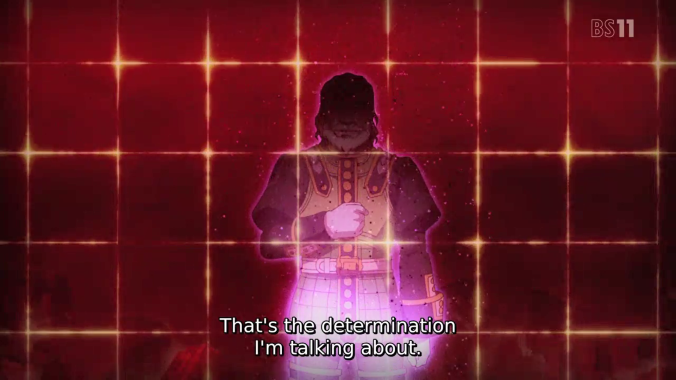 As befits the idea that the story is already ending, Last Encore’s fights are oddly fast. Fate is known for big epic clashes between powerful heroes, so it’s strange that Last Encore’s fights are usually over in minutes. They’re merely brief duels between two people who have already fought before. Last Encore doesn’t have big epic clashes because it isn’t a big epic war. It’s only a single journey through a world that’s nearly reached its conclusion.

In a world of stories that have already ended, it’s fitting that we’re given a protagonist who’s already died. The Hakuno Kishinami we know is an amalgamation of all the Masters who reached the top of SE.RA.PH and died before obtaining the Holy Grail. Hakuno is what’s left of their frustration and resentment, all given a form based on Nero’s old Master, the real Hakuno.

In a very real sense, Hakuno is only an echo trying to find his place in an ending story. Big moments like the reveal of Nero’s true name and Hakuno realizing she’s an NPC have already happened; Last Encore is merely the aftermath of all that.

Even if the story of the Grail War is almost over, there’s still some room for Hakuno. He’s slowly learning who he is and what his role is. The current Hakuno is a last chance to make things right, a final attempt to undo the bad ending we saw at the beginning of episode one. The main story might have ended, but there’s still room for one last encore.

3 thoughts on “Fate/Extra: Last Encore-A Story That Has Already Ended”