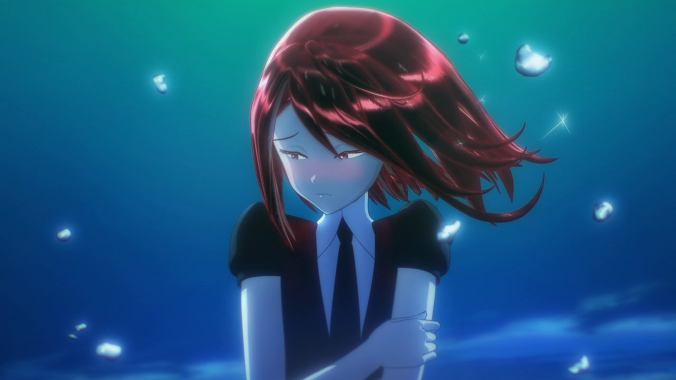 What They Say:
“New Work”

Content: (please note that content portions of a review may contain spoilers)
Well, the ending is finally here. I was concerned with how Land of the Lustrous would tie up so many plotlines in just one episode, but I can honestly say that it was better than I feared, even if it wasn’t as good as I had hoped. The episode begins with Phos meeting Padparadscha for the first time since they were a child and asking about Kongo. Padparadscha only has a few minutes of screen time before they pass out again, but it’s enough to give us a strong sense of who they are. Padparadscha seems older than the other gems, and has the same teasing manner as Yellow Diamond, like they’re always talking to younger siblings. It’s implied that they have some past relationship with Yellow, but the exact nature is kept vague. Padparadscha’s main role in the episode is their conversation with Phos about Phos’ plan to talk to a Lunarian about Kongo. Padparadscha’s response could be interpreted as either a warning that the truth isn’t always pleasant or a threat if Phos keeps digging deeper. Including a scene like this would be interesting normally, but for a final episode, it raises more questions than answers.

The trend continues as we get segments of Rutile being frustrated at taking so long to fix Padparadscha, Phos learning more about Lunarians from Alex, Yellow chasing Rutile around after Rutile calls them senile, and Zircon coming to Phos for advice on how to deal with having Bort as a partner. The latter is the most compelling by far for how it highlights Phos’ growth. Phos has gone from being that goofy, slightly annoying kid, to someone the younger gems can go to for advice the same way Phos went to Dia back in episode 2. Phos even looks back on their more carefree past with regret for what was lost. That sequence is a great demonstration of how far Phos has come, but the rest seems more suited for a midseason episode, not a conclusion. I’ve always liked how Land of the Lustrous gives everyone a story, not just Phos, but having so many new subplots and comedy vignettes in the final episode is unusual with how much is left unresolved.

The main plot returns to the forefront when Phos finally encounters a group of Lunarians, Phos captures one and tries to speak to it, with interesting results. The Lunarian’s eyes spin around so it suddenly has pupils, and it gasps out “f.” Whether that was an attempt at speech or just a gasp is never answered, as Cinnabar arrives and wipes out all of the Lunarians. When Phos returns to speak to Cinnabar later that night, they both finally open up. Phos asks Cinnabar for help investigating Kongo, saying it’s new work, to which Cinnabar quotes Phos’ original promise word for word and reminds Phos that they promised to find “better” work. For all that they deny it, Phos’ promise clearly meant a lot to Cinnabar, and Phos clearly values Cinnabar’s opinion and wants their assistance. Cinnabar is initially reluctant, but finally reflects on their loneliness and mistrust and decides to help. Cinnabar sees Phos’ promise as a kind of last hope. Their general attitude and cynicism have acted as a way to hide the fact that they’d given up on finding something worth doing before Phos’ promise. Even though they’ve barely gotten any screen time, Cinnabar already feels like a fully realized character, both as a person themself, and in their relationship with Phos.

This is a crowing moment for both of them: Phos finally approaches Cinnabar to open up about their doubts, and Cinnabar decides to cast aside their mistrust and help Phos. The two of them are a sweet couple (if that is indeed where the show’s going), and Cinnabar’s blush after revealing that they memorized Phos’ promise only makes them sweeter. The episode finally ends with Phos being called in to meet with Kongo. As they walk back, Phos remembers they’re goofier self from before the winter with some nostalgia. Reflecting back on your younger self is a big part of growing up, and this is a sign that Phos has grown up quite a bit. The episode concludes with Phos walking into Kongo’s office and Kongo greeting them. Ending so suddenly without even showing what Kongo wanted to say is perhaps the strangest decision in an episode full of strange decisions. Phos and Cinnabar deciding to team up is a great moment to end the series on, but so much of the episode seems like its setting up for future content instead of trying to conclude an incomplete story. Even by the standard of read-the-manga endings, this is an oddly inconclusive note to end on.

In Summary:
This is a hard episode to evaluate. Taken by itself, it’s an excellent entry in a consistently excellent show. However, it’s also extremely inconclusive, even for a read-the-manga ending. The entire episode is framed as another entry in an ongoing series, with no effort made to make it seem climactic or final. I’m hoping that this is a sign that there’s another season in the works (it’s a good sign that manga sales have spiked massively since the anime started), but I’m happy with Land of the Lustrous regardless. From start to finish, it’s been a unique experience with an instantly likable cast and a post-apocalyptic world wholly unlike anything else I’ve seen in anime. It’s also a perfect demonstration that 3D animation can be just as good as 2D if used properly. I’d even venture to say that this is the most beautiful anime of the year, and it wouldn’t have been if it were 2D. The quality of the show itself is beyond question, but this episode’s quality largely depends on whether it gets another season, so I’ll be grading it accordingly.