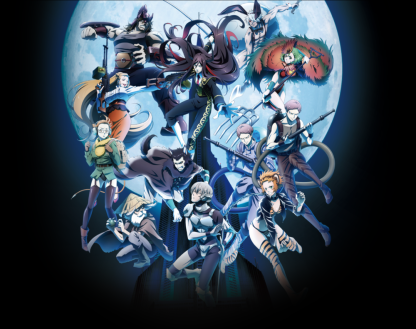 Every twelve years, a contest is waged amongst individuals representing the twelve animals of the Chinese Zodiac. The winner gets a wish granted, and no loser survives. Inoshishi represents the Boar, and she’s the daughter of the Boar who won the previous contest. She strolls into the gathering confident and ready, with machine guns in each hand, after having driven her little sister (who was designated to be the next Boar) into psychosis so she could take her place. But though she knows her opposition better than most, one of them may have a little surprise for her. (from ANN)

I’m not a huge fan of Nisio Isin. Based on Katanagatari (I haven’t seen Monogatari) he’s a good writer whose biggest weakness is his own style. His constant stream of dialogue may work better in a novel, but I’ve always found it tiring and unnecessary. Because of that, I had some worries going into Juni Taisen, and it ended up more or less matching my expectations. This episode is told entirely from the point of view of the Boar, complete with her inner thoughts and backstory. Learning more about her is important, but constantly interrupting scenes with her commentary makes the episode drag on when it should be fun and exciting. Juni Taisen’s premise lends itself well to silly action, but the constant monologuing slows things to a crawl at times. Additionally, it takes up time that would be better spent establishing the world Juni Taisen takes place in. Aside from explaining the basic rules of the tournament, the episode doesn’t explain much about the larger context or the various abilities of the characters, which becomes more important when it reveals that one character is a necromancer. The show also never quite embraces it’s own silliness enough to really entertain. It’s clearly aware that scenes like the Boar turning her sister into a (more) psychotic murderer are too over-the-top to take completely seriously, but it doesn’t have the kind of gleeful energy needed to pull these kind of moments off (partially because of all the talking). I’ve been pretty negative so far, but this wasn’t a bad episode by any means. Nisio Isin has a gift for writing distinctive personalities, and it’s on full display here. From Boar’s casual evil, to Rabbit’s innocent/homicidal attitude, every character who gets more than one line of dialogue is memorable and distinctive. The action is also great, utilizing a lot of fast cuts, slick animation and even some well used CGI for camera movements. There isn’t a lot of action in this episode, but it’s quite good none the less. The animation is also high quality and has an interesting style; characters blur quickly when they’re not close to the camera, and the linework is intentionally rough. It’s an interesting style that gives the show a distinctive look and does a lot to elevate the fight scenes. Overall, Juni Taisen does have potential, and fans of Nisio Isin’s style will likely get more out of it than me, but I doubt I’ll be sticking with it.

Recommendation: Watch (Nisio Isin fans) or Wait and See (everyone else)