In the distant future, humanity has built a massive city run by machines that both build it and defend against intruders. When people suddenly lost the ability to control the robots, the machines began attacking humans indiscriminately and took over the city. Many generations later, the only known enclave of humanity is a small group known as the Electro-Fishers who live in an area that the robots, known as the Safeguard, cannot enter. When Zuru, a young Electro-Fisher, travels out to search for supplies, she is attacked by the Safeguard but is saved by a mysterious man known as Killy. Killy wields advanced weaponry far beyond what the Electro-Fishers have and claims to be looking for someone with the Net Terminal Gene, the gene that allows people to control the Safeguard.

If I had to describe Blame! (pronounced “Blam”) in one sentence, it would be this: Blame! is an excellent commercial for a manga. That doesn’t mean Blame! is bad-anime that’s only made to promote source material can still be good-but it does mean that we don’t get a complete story from Blame!. Still, what we do get is plenty enjoyable.

Blame’s greatest strength is by far its setting. The city is shown to be truly massive, a futuristic maze of paths, pipes, and metal. Seeing the characters wander through it makes you wonder what it looked like at its height before humanity lost control and was forced to hide away. It’s a dark and menacing structure now, but it must have been awe-inspiring at its height We’re only shown a tiny portion of the city, but even that is more than enough to make you curious about the rest. It’s mentioned that the city is thousands of levels deep, but the vast majority of the film is set in one area, and most of the characters know next to nothing about the rest. This actually works in the film’s favor since the less we know about the city, the more we want to learn. 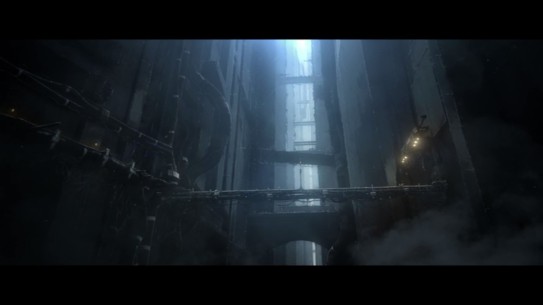 Deliberately keeping the audience in the dark about the setting can be frustrating in a film, but it works for Blame! because we know as little as the characters do. Zuru and the other Electro-Fishers live in a small area that the Safeguard can’t enter, and only venture out for supplies. Much of their history has been lost-they don’t know how to manufacture new gear, they’ve never heard of the Net Terminal Gene, and even the fact that humans used to control the machines is little more than a myth to them. The story is mostly framed from Zuru’s point of view, so the audience is left with a lot of the same questions as her. This may work in the film’s favor with regard to the setting, but it’s frustrating when it comes to Killy’s character.

While he may be the main character, the film reveals almost nothing about him. He only has about fifteen lines of dialogue in the entire movie, which doesn’t leave much room to develop his personality. All we know about him by the end is that he’s from deep in the city and is looking for someone with the Net Terminal Gene. It’s hinted that he’s not quite human since he recovers from injuries faster than any human would and the few shots from his point of view are eerily similar to the shots from the robots’ point of view, but nothing ever comes of it. The entire plot is framed as just one episode in his journey, with few answers about him or why the Net Terminal Gene disappeared. I’m guessing that the manga develops his personality further and reveals more about him and the city, but the movie doesn’t do any of that, which is why I said it feels like a commercial for the manga. The ending resolves the immediate story, but leaves far more questions than answers.

The film fares better on the action side of things. The Safeguard have a creepy, almost alien design that really sells how dangerous they are. The battles all have a tangible sense of tension behind them; the Electro-Fishers are only armed with spear guns and are almost always outnumbered by the Safeguard. The fights all feel more like a matter of survival than a struggle to win. With a near infinite number of Safeguard attacking, all the humans can ever do is try to escape. Killy’s more of a threat to them because of his special weapons, and his fights against them are always exciting to watch, especially the final battle against a particularly advanced Safeguard

Blame’s animation is about what you’d expect from Polygon Pictures: CGI, but relatively good CGI by anime standards. It can be jarring for people used to 2D animation and the textures sometimes look flat, but it’s not bad compared to a lot of fully CGI anime. Think more Knights of Sidonia or Ajin than Berserk.

The soundtrack mostly stays in the background, but there are some exciting action themes used near the end that are more memorable. What’s more notable is how quiet it can get. When the characters are travelling through the city and trying to stay hidden, there’s no music at all, which adds a lot to the creepy nature of the city. The dub is good quality, but nothing too impressive. A lot of the cast are veteran LA voice actors and everyone turns in a solid performance without ever standing out. The acting occasionally sounds a little stilted, but it’s not much of an issue. The one oddity about it is that the actors all give Killy’s name a Japanese pronunciation so it sounds more like they’re saying Kiri, even though the official version is Killy. It’s not a huge problem, just a strange one.

Blame! may end up as nothing more than a commercial for the manga, but it’s a good one. The setting is haunting and practically begs for more development, and it has a good amount of sci-fi action. It’s certainly got me interested in checking out the manga, and I would recommend it to anyone looking for some good sci-fi action.

Blame! is available for streaming on Netflix in sub and dub.