Style over substance is a term that’s often used to refer to works (not just anime) that are perceived to value appearance and presentation over raw story. The general perception is that the way a story is presented is less important than the story itself. I personally disagree with this point of view, and the best counter-example I can come up with is JoJo’s Bizarre Adventure, a highly entertaining anime that wouldn’t be anywhere near as good without its distinctive style. To be clear, when I say style I don’t just mean aesthetic, although that’s an important part of it; I’m also talking about the way the story is presented, the way the characters act and even the type of comedy it uses.

From start to finish, JoJo’s is consistently melodramatic. There aren’t any small problems and everything is treated with the same level of gravity, no matter how silly. Whether it’s a villain revealing their seemingly unbeatable powers, an amorous old woman or a disgusting toilet, JoJo’s is full of dramatic camera angles, speedlines, and shouts of “Oh my God” (in gratuitous English, of course). Even something as fundamentally silly as a killer squirrel attacking a cyborg Nazi is framed in a completely serious manner. This is obviously used for humor a lot of the time, but supports the drama just as well. The sheer level of melodrama in JoJo’s lets it get away with conflicts that would otherwise be too ridiculous to work. You wouldn’t think it, but JoJo’s is able to make “our heroes have to play a baseball videogame for their souls” work as a serious conflict. Even part one, Phantom Blood, which is generally more serious than the subsequent parts, has this kind of melodrama. Of course, I can’t talk about melodrama in JoJo’s without mentioning the great Dio Brando. 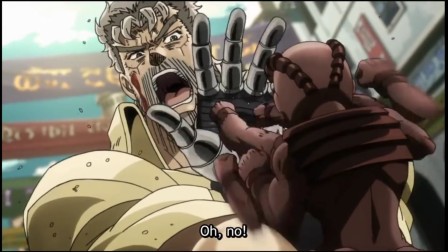 How a character reacts to being attacked by the enemy…

…and how the same character reacts to a disgusting toilet.

Dio is the main villain in parts one and three and perfectly encompasses JoJo’s particular style of hammy melodrama. In one of his first scenes he straight up kicks a dog for no reason, and that’s not even the worst thing he does in that episode. By the end of the episode, he’s burned said dog alive, kissed Jonathan Joestar’s girlfriend against her will, and stolen Jonathan’s friends in an attempt to ruin his life. He’s portrayed as pure mustache-twirling evil from episode one and only gets more evil as the show goes on and he decides to take over the world after becoming a vampire. A character like that doesn’t work at all on paper, and yet he somehow works great in execution. Dio’s a great villain and has been inspiring memes since the OVAs from the early 90s. The reason Dio works so well is because his over-the-top evil fits in perfectly with the anime’s tone. Having a more realistic villain would actually be out of place, since JoJo’s makes it clear that realism is not one of its priorities. The sheer level of ham Dio reaches also helps sell his character. He doesn’t just plan on conquering the world, he does so while kicking a dog, killing a baby, and shouting that Jonathan’s powers are useless useless useless useless (he later uses this as a battle cry). A little ham is stupid and kind of annoying; a lot of ham is captivatingly cool. JoJo’s understands this perfectly and fully commits to Dio’s evilness, which is what makes him one of anime’s classic villains. This commitment isn’t restricted to Dio, either. Whether it’s Jotaro’s shouting “ora ora” in part 3 or a cyborg Nazi shouting how GERMAN SCIENCE IS THE BEST IN THE WORLD, JoJo’s completely commits to it’s camp, which is how the show is able to make it work.

JoJo’s unique style even influences its comedy. There are plenty of more straightforward gags, but a lot of the humor in JoJo’s comes from the contrast between the silly content and the serious presentation. The best example of this comes from a scene in episode nine of Stardust Crusaders. In it, a villain impersonating one of the protagonists attempts to push Jotaro, that arc’s JoJo, off a cliff. Jotaro is able to recover, and the enemy passes it off as a joke. He then puts a cherry in his mouth and starts licking it and saying “rero rero rero” (lick lick lick) while dramatic music plays and the camera frames him from a menacing angle (link). The eerie music even continues as the camera zooms in on his tongue spinning around. The rero rero-ing would be funny enough on its own, but the contrast between that and the serious framing is what makes the humor in JoJo’s unique. 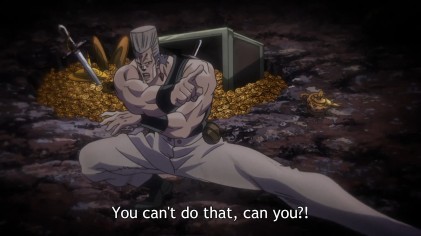 The aesthetic in JoJo’s also contributes to its overall style. JoJo’s has one of the most distinctive art styles in anime; faces are almost exclusively blocky and heavily detailed throughout. The character designs in parts one through three also fit in well. All of the men (and the cast is primarily male) are built like bodybuilders with a ridiculous amount of muscle, reminiscent of Fist of the North Star. Even Jotaro, who’s supposed to be seventeen, looks like this. Part four, Diamond is Unbreakable, goes for leaner designs, but still keeps the same air of manliness seen in the previous three parts. These designs are accompanied by drastic shifts in the color palette to emphasize the more dramatic moments, as well as manly/silly poses. Even during more serious moments, there’ll be a shot of the characters doing a pose that toes the line between cool and silly (and sometimes doesn’t seem physically possible). The poses are also sometimes accompanied by comic book-style text that occasionally shows up to underscore just how dramatic (or silly) a scene is.

Now that I’ve gone over what the style is, it’s time to look at why it’s important. Imagine JoJo’s if it had the same basic story and characters, but had a more typical style of storytelling and aesthetic. That could be done; the story and characters are separate from the style and aesthetic and could exist without the latter two. The problem there is that it wouldn’t be JoJo’s. You could have all of the same plot beats and the same cast, but without it’s unique style and camp, it wouldn’t be anywhere near as good (and certainly wouldn’t have inspired as many memes). That’s not to discount the story and characters of JoJo’s, both are quite good, but the style is just as important. JoJo’s works because all of it works together. Removing the campy style would be just as severe of a blow as removing a character like Joseph Joestar; you would end up with a different (and inferior) show.

JoJo’s Bizarre Adventure is an interesting anime. It sounds too ridiculous to work on paper, but in practice, it’s a ton of fun. Much of that is due to it’s own particular style, which elevates the show beyond the basic plot beats and is just as important as any of the characters are to the experience as a whole. This particular style is a crucial part of what make JoJo, JoJo.

JoJo’s Bizarre Adventure is available from Warner Brothers and on RightStuf. It’s available for streaming on Crunchyroll.