It’s been quite a year. Aside from everything that’s been going in the real world (and there’s a lot) this is also my first year blogging. I’d thought about it occasionally, but never actually done it until May. Now it’s been a solid seven months and I’m still going. I hope to still be doing this when it’s time for my top 10 anime of 2017, but who knows how things will be then. Anyway, now I’ll be listing off my top anime of this year. I just have a few rules for this list. I won’t be ranking these anime at all since (with a couple of exceptions) it would be too hard to decide what goes where. I’m also only including anime that has both started and ended this year (so no March comes in like a lion). Finally, I’ll be including any anime that I think is good enough to make this list, not just TV shows. I’m also only including anime that I’ve seen from start to finish for obvious reasons. There are a couple of shows that I haven’t seen yet that I have a feeling would make this list otherwise, but there’s no point in speculating. Now that that’s out of the way, on to the list! 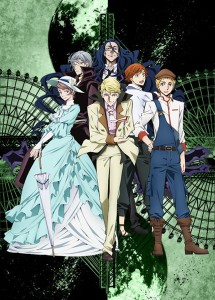 Synopsis: Osamu Dazai, was once a member of the gifted underground group, the Port Mafia, together with Ango and Odasaku. One day, Ango went missing, and Dazai began investigating. He later discovered Ango’s disappearance was connected to a group known as Mimic. In the main storyline, the rivalry between the two gifted groups, the Armed Detective Agency and the Port Mafia continues with an international group called the Guild joining the strife.

This was easily the most surprising show of the season. The first season of Bungo Stray Dogs was good, but had far more comedy than it needed and spent most of its time setting up the supporting cast instead of focusing on the main story. Season 2 balanced the action and comedy far better than season 1 and kept the plot moving at a brisk pace with plenty of supernatural battles that had me looking forward to the new episodes each week. It’s no masterpiece, but I still had a lot of fun with it.

It might seem strange to  include a short with barely any dialogue on this list, but Shelter deserves it. It managed to be both a great story and a great music video, even though it was only six minutes long. With so little dialogue, the story was primarily told visually and still managed to be more emotional than most full length series. Shelter is nothing short of amazing.

Grimgar of Fantasy and Ash

Synopsis: When Haruhiro awakens, he’s in the dark. He doesn’t know where he is, why is he here, and where he came from. Around him there are several men and women who have the same circumstances. Haruhiro and his companions find themselves in a “game-like world” called Grimgar and must form a party, cooperate, and learn new skills to survive the harsh environment together.

At first glance Grimgar seems like just another isekai show with a video game theme, but that impression is misleading. Instead of having a bunch of powerful protagonists, Grimgar focuses on a group so weak that they can barely fight goblins, which makes for a far more interesting setup. What gets Grimgar onto this list is how well it handles grief. When a certain character dies, Grimgar puts a lot of emphasis on how everyone reacts to it and rightfully understands that grief takes time to overcome. Instead of being just another plot point, overcoming grief became the central theme of the show, which I thoroughly enjoyed. 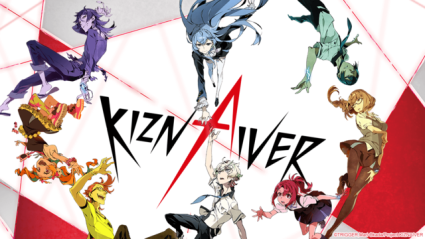 Synopsis: The fictional Japanese city named Sugomori City is built on reclaimed land. But as the years go by, the city’s population is decreasing. One day, Sonosaki tells her classmate Katsuhira: “You have been selected to be a Kiznaiver.” The Kizuna System, which allows Katsuhira to share his wounds, connects him to the classmates whose lives and personalities completely differ from his. The Kizuna System is an incomplete system for the implementation of world peace that connects people through wounds. All those who are connected to this system are called Kiznaivers. When one Kiznaiver is wounded, the system divides and transmits the wound among the other Kiznaivers.

Kiznaiver is an interesting show, no doubt. It combines Mari Okada’s melodrama with Studio Trigger’s particular art style and comedy, all the while trying to tell a story about human connection. The result could have been a hot mess, but instead turned out a pretty good show. Watching the characters gradually get to know each other while learning to deal with their shared pain was a lot of fun, especially when the show took time to dig into individual characters (Honoka’s episodes were easily the best). The plot behind it wasn’t nearly as good, but the characters more than made up for it.

Synopsis: Naho Takamiya is a timid 16-year-old girl. One day, she receives a letter from her future self detailing actions she must take to prevent Kakeru Naruse, the new transfer student, from sinking into depression and taking his own life.

Orange was pretty hyped before it started and while not everyone liked the way it turned out, I enjoyed it plenty. Naho and Kakeru, while frustrating at times, were believable characters with understandable issues. The entire idea behind getting a chance to undo your regrets was a powerful concept, even if the actual methodology behind it was far less interesting than the characters themselves were. Suwa was also one of the most likable characters of any anime this year and could easily have carried the show as a main character. Even though it was occasionally frustrating and often poorly animated, Orange was still a rewarding show that I would easily recommend.

Synopsis: Satoru Fujinuma is a struggling manga artist who has the ability to turn back time and prevent deaths. When his mother is killed he turns back time to solve the mystery, but ends up back in elementary school, just before the disappearance of his classmate Kayo.

Erased was another show that left me satisfied, even if it didn’t live up to the hype. The last few episodes weren’t as good as the rest, but the buildup was great. There was a real sense of tension as Satoru tried to save Hinazuki without knowing who would actually kill her. Their growing friendship was also handled excellently as Hinazuki started to open up about her rough life at home. Even if the final reveal of the killer wasn’t particularly impressive, the rest was good enough to get on this list.

Re:ZERO -Starting Life in Another World-

Synopsis: Subaru Natsuki is an ordinary high school student who is lost in an alternate world, where he is rescued by a beautiful, silver-haired girl. He stays near her to return the favor, but the destiny she is burdened with is more than Subaru can imagine. Enemies attack one by one, and both of them are killed. He then finds out he has the power to rewind death, back to the time he first came to this world. But only he remembers what has happened since.

Speaking of hyped shows, Re:Zero was probably the most hyped show of the year, and in this case didn’t disappoint. It began as a fairly generic isekai light novel adaptation with the twist of having the main character restart every time he dies, but grew to be much more than that. Subaru isn’t some overpowered hero; he’s just a guy. He constantly tries to act like a typical light novel protagonist, but the story punishes him every time and forces him to acknowledge that he’s just an ordinary guy. The journey to reach that point is excellently handled and makes Re:Zero one of the best of the year. It’s also one of the two anime that I’ve considered for the title of best of the year.

Alderamin on the Sky 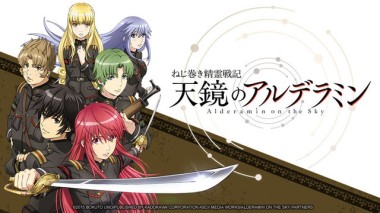 Synopsis: The Katvarna Empire is at war with the neighboring Republic of Kioka. In the Katvarna Empire, the lazy, woman-admiring Ikuta hates war, but due to certain circumstances, he grudgingly takes the High Grade Military Officer Exam. No one would have expected that this 17-year-old young man would eventually become a soldier called a great commander by others. Ikuta survives this world engulfed in war with his superior intellect.

Alderamin was a pretty surprising show. I went in with pretty low expectations and the first episode seemed to confirm them by sticking to standard light novel tropes. However, it improved quite a bit after that. The final product was a pretty entertaining military action show with a focus on tactics over brute strength. The protagonist, Ikta, seemed like an arrogant asshole at first, but turned out to be pretty likable and clever, with a philosophy of “be lazy whenever possible.” The best part by far was the relationship between Ikta and his friend Yatori and how they relied on each other to stay grounded. I wish there was a second season since it had a read-the-novel ending, but I’m still satisfied with what we got.

Synopsis: The world has fallen into decay. Humanity is all but lost. This is a story of a junker who wonders into a city guarded by automated defense units. While there, he meets an android named Yumemi who has continued to manage her store even though nobody has come by in years.

With only five episodes and two characters, Planetarian is a very simple story, but shines because it has both a strong concept and strong execution. Yumemi’s situation is inherently tragic, but the anime never oversells it. Her loneliness isn’t shown through big speeches, but through her joy at having someone around again. Her relationship with the Junker feels natural and is emotionally moving throughout. Plaentarian is a simple story, but one that’s well told.

Synopsis: Mitsuha Miyamizu is a high school student in the rural countryside of Japan. Taki Tachibana is a teenager living in Tokyo. As a comet approaches Earth, their dreams and lives start getting entangled. One day Mitsuha wakes up as Taki. Taki one day wakes up as Mitsuha. For some time they sporadically switch bodies until one afternoon they lose complete contact.

If I had to pick one anime as the best of 2016 it would be Your Name. Makoto Shinkai has made several good movies, but Your Name. outclasses all of them. It combines Makoto Shinkai’s typical themes of connection and separation with a fast moving plot and a lot of good comedy. The humor in the first half only enhances the tragedy  of the second half as those themes become clearer. Your Name. is not only the best anime I’ve seen in 2016, it’s also the best movie I’ve seen in 2016.