Back when I first started blogging, I wrote an article on the importance of endings and used Fullmetal Alchemist: Brotherhood as an example of a great ending. I briefly explained what I liked about it there, but I feel like it deserves a more thorough explanation. Every time I’ve watched it (I just finished it for the third time), the final act has consistently impressed me. It takes a story that could easily collapse under its own size, and manages to have one of the most engrossing final acts of any anime I’ve seen. Everything from the start of the battle for Central onward is just great and topped anything the series had done before.

Part of what makes it so impressive is how many characters it manages to juggle. In addition to the Elric brothers, there’s Roy Mustang and his subordinates, Maria Ross, the Armstrongs, Scar, the four chimeras, Greeling, Ling’s retainers, May Chang, Izumi and Sig Curtis, the soldiers from Briggs and that’s not even everyone involved. Juggling that many named characters is usually a great way to destroy any sense of pacing in a story and come off as wasting time. Brotherhood doesn’t do this. Instead, it gives every character an important role in the story. Other anime have tried this and ended up getting bogged down in secondary characters fighting secondary villains who only seemed to exist to give them something to do. Brotherhood also avoids this trap by making everything relevant to the plot as a whole in some way. Even minor characters like Yoki, who was mostly just comic relief before, get their moment in the spotlight without ruining the pacing. More important characters like Mustang and Armstrong get moments that could serve as the climax of a lesser arc, but end up just being parts of an even bigger whole. That’s not to say that they’re less important, Mustang’s battle against Envy and confrontation with Hawkeye is one of the best parts of the show, just that they all contribute to something even bigger. It helps that Brotherhood has some great action scenes, but those aren’t the most important part. Other shows have had good fights, but neglected the story as a result. Action scenes are plenty enjoyable, but shouldn’t come at the expense of the story. If I had to choose between good action and a good story, the story would win out every time. 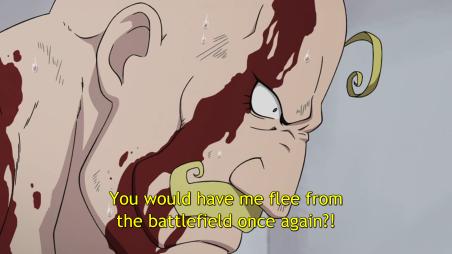 Juggling this many characters and subplots presents its own problem: even if they’re important to the story as a whole, some are likely to be more interesting than others, which could make it frustrating to sit through the less interesting parts. Brotherhood avoids this by both keeping everything interesting, and switching between characters throughout the arc. Multiple events taking place at different locations could all be covered in part during the same episode, and each one is so compelling that I always forgot about everything else going on. It says a lot that a story this massive didn’t have a single boring subplot; everything was engaging from start to finish without ever dragging.

I could say a lot more about Brotherhood, but this one aspect deserves an article all on its own. The finale was so big that it shouldn’t have been able to work, but Brotherhood not only makes it work, it makes it one of the most compelling arcs in anime. It’s rare for shows as popular as Brotherhood to live up to their reputation, but this particular anime deserves its popularity.

Fullmetal Alchemist: Brotherhood is available for streaming on Crunchyroll. It was previously available from Funimation, but is now out of print.