The following article contains major spoilers for every show mentioned. Read at your own risk.

Character deaths can be extremely impactful in both anime and fiction in general. If done right, they can be the most emotionally moving scenes in a story and can signal a major shift the plot. They’re also very easy to do wrong. To be clear, I don’t mean minor character deaths or random villain deaths. When I talk about death scenes, I mean scenes for significant characters that are at least intended to leave an impact. In general, a character’s death should matter at least as much as the character did. Otherwise it risks feeling unearned if overdone or unsatisfying if underdone.

As a general rule, death scenes need to matter in some way. They should always have some impact on the rest of the cast or the audience. Killing off characters for its own sake without finding a way to make it matter or create emotional attachment is frequently a bad idea. Akame ga Kill is one of the worst offenders in that regard. As I mentioned in my review, Akame ga Kill had a bad habit of developing characters just so it could kill them and killing off major characters for the sake of killing them. This sort of thing doesn’t work because it cheapens both the characters’ development and makes their deaths feel manipulative. Furthermore, it becomes predictable and tedious quickly, a major problem for a show that relies on shock value. Shock value isn’t necessarily bad, but a proper character death needs more than that. It needs to feel like it matters and should preferably draw some emotion from the audience.

Naruto is another show that didn’t always handle deaths well. There were some good deaths (Zabuza and Haku, Jiraya) but later on, it developed a bad habit of reviving dead characters. The worst offender was the Invasion of Pain Arc, which killed off a lot of named characters, including Kakashi, who was a central character for most of the series, only to revive all of them at the end. Arbitrarily reviving so many characters not only cheapens their deaths, but also any future deaths. Once an author shows that they’re willing to pull a trick like that, there’s no way for the audience to know that they won’t do it again, so it becomes that much more difficult to draw genuine emotion out of death scenes.

I’ve been focusing on the negatives so far, but anime also has a lot of examples of well handled deaths. Attack on Titan has a reputation for killing off characters left and right, a reputation that’s well earned. Named characters don’t have the same plot armor you see in most anime (or fiction in general) and frequently get killed in unexpected ways. Unlike Akame ga Kill, these deaths are genuinely unpredictable and have weight because they contribute to the feeling that anyone can die for any reason. This is most noticeable later on in the series when Eren’s friends from the Survey Corps are summarily killed off over the course of one scene. These deaths were both shocking and emotional since all four of them had gotten nearly as much screen time as Eren and had distinct, likeable personalities. Their deaths really drive home the point that anyone can die at any time.

One Piece is another anime that handles deaths well. It may sound strange to bring it up, since One Piece almost never kills off named characters outside of flashbacks, even when it should. However, the Marineford Arc completely changed this. In the span of about three episodes, it killed off both Ace and Whitebeard, two characters who had gotten almost as much focus as Luffy during that arc. In addition to being completely unexpected, their deaths worked as near perfect conclusions to their respective arcs. Ace and Whitebeard had been developed gradually throughout the entire arc and their deaths ended up feeling like natural conclusions to that instead of the point of their development. Their dying thoughts reflected their personalities perfectly; Ace thanked his crew for loving someone like him, and Whitebeard used his last words to start a new Great Pirate Era and then simply reflected on how grateful he was to his “sons.” In addition to this, both deaths signaled a major shift in the plot. Ace’s death was one of the few times Luffy was completely defeated in an arc without making a comeback, and Whitebeard’s death set up Blackbeard as a major villain. Even if it rarely does so, One Piece knows how to kill off characters. 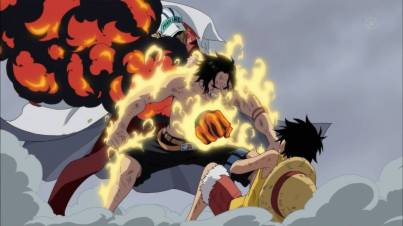 Out of all the anime I’ve seen, the one that has handled death the best is probably Grimgar of Fantasy and Ash. Grimgar is the only anime I’ve seen that’s made a single character’s death the focus of much of the story. When Manato, the de-facto leader of the main group, died in episode 4, it wasn’t a huge shock since he’d been getting death flags throughout the episode. What makes his death so significant is how if affected the rest of the cast. They were all completely shocked and spend much of the series trying to find a way to keep going. Manato was the one who held them together, and the rest of the characters didn’t know what to do without him. Some of them get closer, others start fighting more and Haruhiro keeps trying to fill Manato’s shoes, which he can’t truly do; they all go through a natural grieving process. Grimgar understands that the way the rest of the cast reacts to a character’s death can be just as impactful (if not more) than the death itself. By using this to its fullest potential, Grimgar gets more emotion from one death than most shows do in their entire run.

Character deaths can be an important part of fiction, but are also easy to get wrong. A story that doesn’t know how to handle them properly could end up worse off than if it jus didn’t kill any characters. On the other hand, a well executed death can be the defining moment of a story. As is often the case, it all comes down to execution.

2 thoughts on “How to Kill off Characters”