Serial Experiments Lain is weird. Not in the way Bobobo-bo Bo-bobo is weird with random comedy and unfamiliar cultural references. Serial Experiments Lain is weird in the End of Evangelion style of weirdness: abstract symbolism and striking imagery mixed with a story that values theme and atmosphere over a clear narrative. When I say weird, I don’t mean it in a negative way; I’m just using it as a descriptive term. There’s really no other way to describe it in a single word. It’s weird.

Lain Iwakura is a shy, introverted middle school girl living a fairly ordinary life. One day, she receives an email from a friend who committed suicide a week earlier saying that the girl is still alive in the Wired (basically the internet). From there, Lain gets a new Navi (computer) and starts investigating the Wired. As she goes deeper and deeper into the Wired, the boundary between it and the real world slowly starts to blur and strange things start happening around Lain.

The best part of Serial Experiments Lain is how atmospheric it is. Everything about the show works to create an unsettling atmosphere that pervades it from start to finish. Every episode begins with a crowded crosswalk with aggressively bright lights, a trend that continues through most outdoor scenes. Whites are bright and oversaturated, which makes even sidewalks look creepy when they blend with nearby houses. In contrast, shadows are creepily over-detailed to the point where they barely look like ordinary shadows anymore. The sound design is just as creepy. Music is used very sparingly, and many scenes have very little dialogue, which contrasts with the incidental noises that seem just a little too loud. With so little else going on, ordinary sounds like power lines humming and chalk on a chalk board sound sinister and can end up dominating scenes with nothing else happening. Even the character designs feel slightly off with how unnervingly detailed the eyes are. Lain’s expression is almost constantly inscrutable, making it hard to find anything to get firmly attached to in that world. Combined with a strangely told story, these factors give Lain an unsettling atmosphere that’s on par with the greatest atmospheric anime like Ghost in the Shell and Kara no Kyoukai. 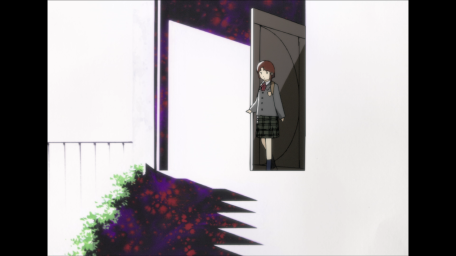 The story is similarly unusual. Much of the first half to two-thirds feels slow paced, even though things are clearly happening. The reason it feels this way is because things happen, but their significance is never explained. Lain gets a mysterious package with an advanced computer chip. A man shoots up a club and kills himself. Mysterious men in black start stalking Lain. A hacker group nobody seems to know anything about hacks a video game. All of these things happen, but the show doesn’t explain why they’re happening or why they’re important. I’d criticize it for that except that method of storytelling is clearly intentional and contributes to the lack of certainty about what’s real. Lain is never clear about what’s reality, what’s part of the Wired, what’s meant to be taken literally, what’s symbolism and whether any of that actually matters. This is most embodied by the text that occasionally appears on screen amid psychedelic colors. It’s never clear if it’s supposed to be narration, characters’ inner thoughts, or both. The show’s entire approach to reality is very postmodern, which is common in many anime from that period.

Lain explores many postmodern ideas that are likely familiar from other anime made in the 80s and 90s. I already talked about how much it questions reality, but it also brings up questions of identity and connection to others. Without spoiling anything, later events start making Lain question her sense of self. There are also questions about the Wired/internet that are surprisingly relevant for a show made in 1998. Lain’s father comments once that while the Wired connects everyone, it’s still just a means to carry ideas and not reality itself. Lain, on the other hand, claims that it’s just as real as “reality.” As the show goes on, the Wired actually starts to become more real to her than the “real” world.

Lain as a character is especially unusual. As the title indicates, she’s the main character, but the story isn’t told from her perspective. It’s more like we’re just watching what happens than being part of it. Her inner thoughts and motivations are never made completely clear to the viewer. Her face is mostly blank and she doesn’t talk a lot, which leaves us to piece her character together based on her actions. She even seems distant with other characters, who have a tendency to talk over her. This is made even more difficult since she’s quiet and shy most of the time, but occasionally acts more assertive, which is marked by a distinct shift in her manner of speech. This style of characterization works well with the atmosphere, but leaves the show feeling cold and emotionless at times. Later episodes improve on this as Lain’s relationship with her friend Arisu/Alice is expanded on, although it would have been better if the emotional content had been spread more evenly.

The animation for Lain is a little old, but it looks great for a show made in the late 90s. Movements are generally smooth, backgrounds look great and characters mostly stay on model, even in HD. The character art has the perfect amount of realism to add to the unsettling feel of the show. The music is excellent, but used very sparingly. Keeping most scenes quiet actually contributes more to the atmosphere of the show than any music could have. The opening was done by a British indie band called BOA (which I highly recommend looking up), and is just great. It has a kind of haunting beauty that fits the show perfectly.

Serial Experiments Lain is definitely an unusual anime, but is also a great one. It’s atmosphere is masterfully done, the characters are interesting (if somewhat distant) and the story isn’t quite like anything else out there. Lain is weird, but good weird.

Serial Experiments Lain is available from Funimation and on RightStuf. It’s also available for streaming on Funimation’s website.