A common complaint among anime fans is that certain shows have too much 3D CGI. Some are primarily CGI, like the new Berserk, but most modern anime have at least some CGI, which isn’t always a bad thing. It’s not always good, but there are enough examples of good CGI in anime that it’s not worth writing off completely.

Before I look at examples of good and bad CGI, it’s important to look at it in a more general sense. The reason CGI in anime frequently looks so bad is that the animators try to imitate the limited animation style of 2D anime by cutting frames (this article explains more about the technical aspects behind it). The idea behind it is that it blends better with 2D anime if it’s animated in the same style, which isn’t the case at all. What looks natural in 2D just looks jerky and awkward in 3D. It’s not as though Japan doesn’t have the technology for it; there’s been some good CGI work produced there, even in anime. Ghost in the Shell 2: Innocence, as well as Stand Alone Complex, had some pretty good CGI and they’re both over 15 years old. The main problem is that the styles don’t mesh well. The same can be said for the art. The anime art style was always meant for 2D, and it tends to look awkward when 3D models have anime-style features, like in Expelled from Paradise.

At its worst, CGI can be distracting enough to ruin a scene. It rarely gets that bad, but CGI almost always stands out when it’s used alongside 2D animation and can frequently break immersion or distract from the actual content of the scene. Most of the time it’s only slightly distracting, but there are exceptions. The reason people still joke about the dragon scene from Fate/Stay Night isn’t so much because of the content as because of how awful the CGI was.

There’s also been a tendency in recent years for anime to be mostly or entirely CGI instead of just using CGI for more difficult objects and scenes. Expelled from Paradise, Knights of Sidonia and the new Berserk adaptation have all done this. Unfortunately, almost every CGI anime cut frames the way I described above, and, from what I’ve seen, the result is less than optimal. Being CGI generally isn’t enough to ruin an anime, but it does put more pressure on the writing to keep the audience engaged. Writing should work with animation, not in spite of it. There is one exception to fully CGI anime: Final Fantasy VII: Advent Children. That movie was made in 2005, but the CGI looks better than most current CGI anime, partially because the staff didn’t cut frames. It’s not impossible to make a good looking CGI anime, there just haven’t been that many.

I’ve been going on about all the negatives of CGI, but it isn’t entirely bad. CGI can be really impressive when it’s used for backgrounds. When it’s used like that, the frame cutting isn’t an issue since backgrounds don’t move in the first place, and it can allow or some great looking backgrounds. Ufotable did this for both Fate/Stay Night: Unlimited Blade Works and Tales of Zestiria the X, with some great looking results. Ufotable’s heavy post-production work also helps it blend in better with the 2D animation. 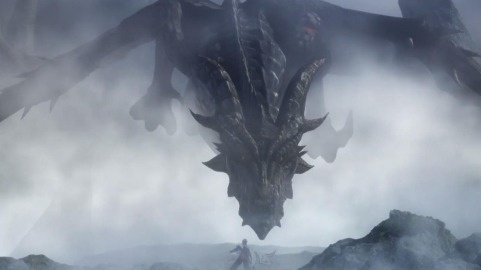 …and a dragon done right.

It’s also great for sweeping “camera” movements. The reason anime mostly relies on simple pans (assuming there’s any camera movement) is because it’s incredibly difficult to animate anything else. If the camera moves and shows a scene from multiple angles, the animators have to work hard to draw both the characters and the background from multiple angles and also make sure everything stays consistent and flows well. On the other hand, a moving camera is simple to do with CGI since it’s already in 3D. Attack on Titan did this with most of the action scenes, having the CGI support the 2D animation instead of replacing it. The result is some thrilling fights that it wouldn’t have been able to pull off in 2D. This is a case where it would actually have been an inferior show if it was only 2D. That’s the best way to use CGI in general: having it enhance the 2D animation instead of just replacing it.

CGI isn’t going anywhere. No matter how much we complain about it, anime is going to have CGI. Even though it’s frequently detrimental, CGI can also be an asset when it’s used right. CGI can do a lot that traditional animation can’t (easily) pull off, animators just need to play to its strengths. It might take time, but CGI is definitely improving and has a lot of potential if it’s used right.

2 thoughts on “CGI in Anime: The Good and the Bad”