If you’ve been involved with the anime community at all in the past year or so, chances are you’ve heard of a little show called One Punch Man. Based on an already popular manga and webcomic, One Punch Man has exploded in popularity since the anime first premiered last year. The big question here is why. The easy answer is “because it’s really good,” which, while true, doesn’t actually answer the question. There’s a lot of really good anime out there that, for whatever reason, never got as popular as OPM, which means there has to be more to it. It’s not just the flashy action scenes either, although that definitely helped. OPM started to get popular back when it was just a webcomic, and the comic didn’t look very good. The story and the fight scenes were basically the same, but the art was pretty bad and obviously amateur. It says a lot that something that looks so unappealing at first glance was able to get so popular. 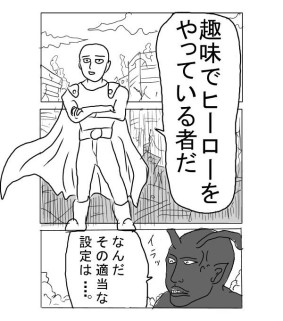 What makes OPM so easy to like is how it works as both a parody of action anime and an action anime itself. It has all the cool fight scenes that fans like, but also goes beyond that. Saitama is basically the natural evolution of the typical shonen hero. He started out as an ordinary guy, but grew to be so strong that nobody could beat him. His boredom makes sense since that’s what you would expect to happen with a shonen hero who made it their life’s goal to get stronger but ran out of challenges. Saitama is just an ordinary guy who ended up becoming a shonen lead. There’s just nothing else quite like One Punch Man out there. There are plenty of shonen action shows and plenty of genre parodies, but few things that can combine the two.

The world of One Punch Man ties into this, with plenty of absurd ideas that the characters take completely seriously regardless. The first episode features a guy who turned into a crab monster because he ate too much crab, which is just as ridiculous as it sounds. Saitama, on the other hand, is completely deadpan about everything and is motivated by the most mundane things. In one of the early episodes, a villain rambles on about how he’ll go on a week long rampage and destroy the city, and what motivates Saitama to fight is the realization that he’s about to miss a sale at the supermarket.

It’s impossible talk about One Punch Man without including this meme.

Familiar concepts like this combined with its unique execution is what really makes OPM so popular. It has all of the action and goofy humor that’s common in popular anime, but provides a unique take on it. All of the biggest hits of the past few years had something like this. Attack on Titan, Sword Art Online, Kill la Kill, they all had something that made them stand out from the start but incorporated enough familiar elements to appeal to typical fans. What really makes the story of OPM stand out is Saitama himself. Like I said before, Saitama is basically what you get when a completely ordinary guy is put in the role of shonen hero. The basic role is familiar, but the way he acts in it is what really makes him so memorable. Saitama encompasses what makes the story of One Punch Man so memorable. Of course the action and the amazing animation helped, but the blending of familiar elements and unique execution is what started its popularity in the first place.