Warning: Spoilers for Kabaneri of the Iron Fortress up to episode six and Attack on Titan in general.

How familiar does the following premise sound? “The world has been overrun by monsters of unknown origin that attack and kill humans on sight. The only survivors live in heavily fortified areas with the monsters right outside. Our main character is a young man who’s angry with the way his society acts and wants to fight back against the monsters, even after he discovers that he himself has abilities similar to them.” If you said Attack on Titan, then congratulations, you’ve been to an anime website in the past three years. All joking aside, this is the exact premise of Kabaneri of the Iron Fortress as well. The two even share a director (Tetsuro Araki), a studio (Studio Wit) and much of the same staff, which doesn’t help comparisons. Some people have even nicknamed it Shingeki no Kabaneri, which is fairly fitting based on the first episode. As you might guess from the title, though, Kabaneri has proved to be its own show. 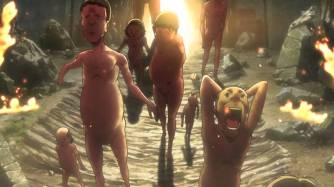 What really differentiates Kabaneri from its predecessor is the actual execution. The first couple of episodes were almost copy-pasted from Attack on Titan, but since then, Kabaneri has primarily stuck to its own story. Much of the series has followed the cast trying to escape the Kabane, which are essentially zombies, on an armored train and the fights have generally been more defensive than offensive. The subplot of people distrusting the Kabaneri, humans with Kabane-like abilities, has also taken the forefront for much of the anime, while the analogous subplot in Attack on Titan was given much less attention and more or less resolved shortly after it became an issue. The two have also been different tonally; Attack on Titan was near constant intensity and adrenaline, while Kabaneri has been a bit more measured and every episode has had at least some slower moments.

What differentiates the two the most, though, is the characters. Ikoma has some basic similarities to Eren, but is ultimately a different character. Eren is a straightforward hothead through almost all of Attack on Titan, while Ikoma has been much more intellectual. He fights the Kabane more by inventing new weapons and coming up with strategies to fight them instead of simply attacking. I won’t talk about Mumei too much here since much of her backstory is still a mystery, but almost all of her character is different from anything in Attack on Titan.

I may end up eating these words since it’s only six episodes in, but unless it makes some major missteps, Kabaneri is going to end up being its own show (for good or ill). Thus far, I would recommend it, but that’s only based on the episodes that have aired up to this point, so I may revise my opinion depending on how it progresses.

Kabaneri of the Iron Fortress is available for streaming on Amazon Prime.