Very few anime have had as long a life as Berserk. Beginning as a manga that’s been running since the 1980s, Berserk has spawned a television series, three movies and a second television series that’s airing later this year.  The original television series is how most people (myself included) got into the franchise in the first place and that’s what I’ll be reviewing now.

The first thing that stands out about Berserk is how divorced the first episode is from the rest of the series. Berserk takes place in a pseudo-Medieval fantasy world where two countries have been at war for 100 years.  The story starts with a young swordsman named Guts meeting and being forced to join a mercenary company called the Band of the Hawk. The Band is led by a charismatic swordsman named Griffith who has ambitions to become king. This is not what the first episode is about. The first episode shows a much older Guts wandering around fighting monsters in what appears to be a completely different world. For most of its run, Berserk has no magic and only hints of the supernatural creatures that are front and center in episode 1. Even more surprising is that it basically spoils itself. About halfway through the episode, a random background character straight up says that Griffith became king and that everything has been bad since then. This seems like it would render the rest of the series pointless, but instead it gives it an ominous feel, like everything is destined to end in tragedy. What anchors everything else is the strength of its character writing. 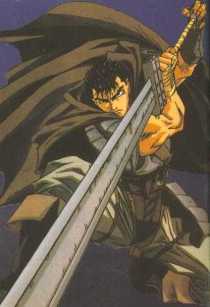 Much of the anime’s focus is given to Guts, Griffith and Casca, one of Griffith’s lieutenants who seems to hate Guts from the moment she meets him. At first Guts seems like a generic action hero with a giant sword, but that couldn’t be further from the truth. Guts is defined by his skill in battle, but that’s because fighting is all he knows. It’s Griffith’s influence that really changes him into something more.  As the series progresses, Guts begins to want more than just battle and actually desires some kind of goal of his own. This makes him stand out compared to the rest of the Band, since everyone there, especially Casca, is fanatically loyal to Griffith and his ambition. Griffith himself remains an enigma for most of the series. He never completely opens up to anyone, even Guts, and it’s never clear what he’ll do next. His charisma stands out in every scene and it’s clear why people follow him, but what truly defines him is his ambition. From start to finish, every action he takes is in service of him becoming king. Two things give his desire a more ominous feel: the offhanded comment from episode 1 and a strange looking trinket he carries called the Egg of the King. Griffith says that it was given to him by a fortune teller who said that it meant his destiny was to become king, but the egg’s appearance gives it an evil feel and leads one to wonder if it’s really just a trinket or something far worse. 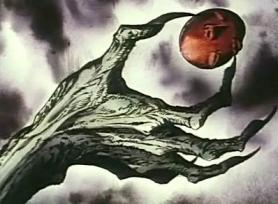 How could this not be evil?

What it excels at is fleshing out motivations. Everyone, from the leads to the minor characters whose names you can’t remember, has some kind of motivation that drives everything they do. Griffith’s goal to become king drives almost everything in the story, while Guts’ goal to be more than just “the muscle” is what changes him from an archetype to a character that feels real. Even Casca’s goal to help Griffith become king feels real, even if it isn’t her own ambition she wants to fulfill.

Berserk is ultimately a story of ambition, what it makes people into and the ultimate cost of it. Griffith’s ambition to become king drives the story for most of its run, and Guts’ need to have a goal of his own is what makes him a full character. Even the secondary members of the Band have goals of their own, although most of them view their own goals as secondary compared to helping Griffith achieve his. As the series progresses, so do the challenges Griffith faces. Many nobles oppose a commoner like him gaining status so rapidly, and the middle episodes are heavy with political intrigue and plotting. What finally make the price of ambition clear is the ending, which is tragic in more ways than one.

Read the manga endings are common in anime, but Berserk goes a step beyond it. Instead of finishing the current plotline but leaving the main story unfinished, Berserk just stops. What I mean by that is that it ends in the middle of the climax without actually resolving anything. It felt like there was supposed to be another episode, but there wasn’t. It just stopped. I would normally be more annoyed at this since a bad ending can ruin an otherwise good anime, but Berserk’s ending was so shocking that I almost admire the balls it takes to end like that. It still would have been better if it had a real ending, but the non-ending doesn’t detract from it as much as it normally would.

What does detract somewhat is the animation. Berserk was made in the late 90s and aired at 3:30 in the morning, so it didn’t have much of a budget, which shows. It avoids showing movement whenever possible and frequently resorts to still-frames. This becomes a problem when even the action scenes, of which there are many, look straight up cheap. Fortunately, the soundtrack is excellent. Composed by Susumu Hirasawa, it has a near-perfect mixture of action tracks and mood pieces. Forces, the track that plays during episode previews, stands out the most and is worth listening to on its own. 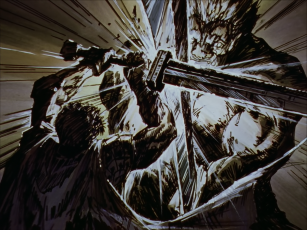 The dub for Berserk is pretty good for its time and features a lot of voice actors who don’t show up much anymore, which can be pretty refreshing. The acting isn’t great by modern standards, and Griffith sometimes sounds stilted, but overall it’s perfectly fine if you like dubs. There are also some really funny outtakes that are worth checking out.

Even with its non-ending and cheap animation, Berserk still stands as a great series that earns its reputation as a classic. It’s clear why it has endured so long and why there have been so many remakes.

Berserk was originally licensed by Media Blasters, but is currently unlicensed and out of print. There are some used copies floating around, but they’re not cheap.